I wanted a repair stand that would allow me to easily work on my bikes. I would have loved to own a Park Tool repair stand, but I couldn’t justify the cost. I search the net, and found I could hang my bike from the ceiling with ropes. I tried it, it sucked. The bike was swinging all over the place, and would tilt if I removed a wheel. I found some other plans. I didn’t like most of them. But I found a couple that showed a clamp made from PVC. (The first plans I found. Here are the second.) I liked the clamp. But I didn’t want my stand mounted to a bench, or a wall like the plans I found. So I borrowed the designs for the clamps, and built a floor stand. These are my plans. They could probably be modified to make a two bike stand. Simple make a larger base, and instead of using a 90 degree elbow, use a tee section, and build a clamp for the other side as well.

2) The column will be made from a 1 1/4″ pipe about 56″ long (threaded at both ends), which will be mounted to the base using a flange. The flange should be located about 1/2″ from one of the 16″ ends, and centered. Mark where the bolt holes should be, and then drill a 1/4″ hole for each bolt. On the underside of the base, you will want to widen and deepen the bolt holes so that the washers, and nuts will be inset. Now mount the flange to the topside of the base using the 1/4″ bolts, washers and nuts.

3) Screw the pipe into the flange.

4) Screw the 90 degree elbow onto the top of the upright column.

5) Screw the 10 inch piece of pipe into the elbow piece so that it hangs out over the base.

Time to build the clamp!

6) Cut the PVC T section like in the picture below. I used a miter saw, but a band saw, or other type of saw will work too.

7) Fit the pieces back together. Place the hinges across the seam on one side, and mark well the holes should be. Drill the holes.

8) Mount the hinges. I used a Dremel to cut off the excess screw length.

9) Place the latch across the seam on the opposite side from the hinges. Mark, and drill the holes.

12) Cut a piece of foam pipe insulation to pad the inside of the clamp.

The clamp would allow the bike to tilt if it got out of balance. I cut a notch in the tee-fitting where it slid of the iron pipe. I then put a hose clamp around it. The idea is that I can fix it in place, but I can still adjust it to different angles. It still allows the bike to tilt if it gets way out of balance. But it did improve. I suppose the clamp could be permently attached to the pipe. Then maybe at the other end the “arm” pipe, I could have that rotate in the 90 degree elbow. I could drill a hole in the elbow, and tap it, and have a locking screw. Wow! I like that idea! 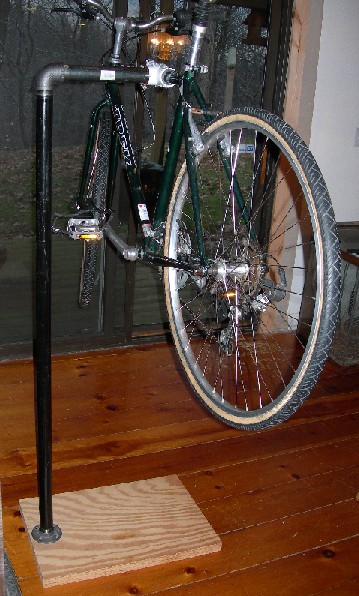